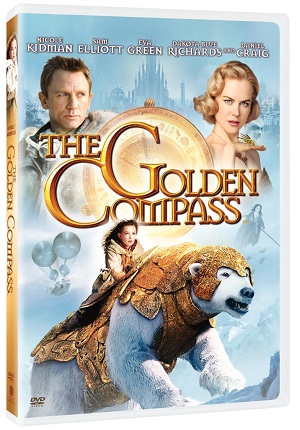 The Golden Compass is a movie that is coming out early December of this year. It looks like it will be a very enjoyable fantasy movie, and it is being made into a trilogy, so it should be a great series.

I got this warning today in an email that directed me to the snopes.com page about this movie. Here is what the movie is really about.

There will be a new Children’s movie out in December called THE GOLDEN COMPASS. It is written by Phillip Pullman, a proud athiest who belongs to secular humanist societies. He hates C. S. Lewis’s Chronical’s of Narnia and has written a trilogy to show the other side. The movie has been dumbed down to fool kids and their parents in the hope that they will buy his trilogy where in the end the children kill God and everyone can do as they please. Nicole Kidman stars in the movie so it will probably be advertised a lot. This is just a friendly warning that you sure won’t hear on the regular TV.

[Collected via e-mail, October 2007]I don’t just generally dismiss a movie or book just because someone ‘says’ it’s meant to be something else…but this is worth knowing if you plan to see it (or plan to take your kids).

“Hi! I just wanted to inform you what I just learned about a movie that is coming out December 7, during the Christmas season, which is entitled THE GOLDEN COMPASS. It stars Nicole Kidman and it is directed toward children. What is disturbing to me is that this movie is based on the first of a trilogy of books for children called HIS DARK MATERIALS written by Philip Pullman of England.

He’s an atheist and his objective is to bash Christianity and promote atheism. I heard that he has made remarks that he wants to kill God in the minds of children, and that’s what his books are all about. He despises C.S. Lewis and Narnia, etc. An article written about him said “this is the most dangerous author in Britain” and that Pullman would be the writer “the atheists would be praying for, if atheists prayed.” Pullman said he doesn’t think it is possible that there is a God and he has great difficulty understanding the words “spiritual” and “spirituality.” What I thought was important to communicate is what part of the agenda is for making this picture. This movie is a watered down version of the first book, which is the least offensive of the three books. The second book of the trilogy is THE SUBTLE KNIFE and the third book is THE AMBER SPYGLASS. Each book gets worse and worse regarding Pullman’s hatred of God. In the trilogy, a young girl becomes enmeshed in an epic struggle against a nefarious Church known as the Magisterium. Another character, an ex-nun, describes Christianity as “a very powerful and convincing mistake.” As I understand it, in the last book, a boy and girl are depicted representing Adam and Eve and they kill God, who at times is called YAHWEH (which is definitely not Allah). Since the movie would seem mild if you viewed it, that’s been done on purpose.

They are hoping that unsuspecting parents will take their children to See the movie, that they will enjoy the movie and then the children will want the books for Christmas. That’s the hook. Pullman says he wants the children to read the books and decide against God and the kingdom of heaven.

If you decide that you do not want to support something like this, I suggest that you boycott the movie and the books. I googled a synopsis of THE GOLDEN COMPASS. As I skimmed it, I couldn’t believe that in a children’s book part of the story is about castration and female circumcision.

After that, snopes goes into some details about the facts of these claims. You really should check it out.

One thought on “Movie Warning: The Golden Compass”