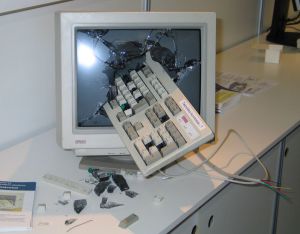 Life Application Personal
May 20, 2011May 20, 2011 Xiontawa 5 Comments entertainment, games, pc gaming, video games
I have been playing PC games for years…okay…12 years to be exact.  I have greatly enjoyed the time I have played them; however, that time is coming to an end.  No, I am not quitting video games…as a matter of fact I still plan on playing a lot.  Anyways, time to stop boring you with my rambling and get to the point.

Why am I leaving PC gaming…?

Well, a lot of reasons actually.  For the last 12 years, since I got into PC gaming, I mostly played MMORPGs (Massively Multiplayer Online Role Playing Games).  There are rather large problems with MMORPGs.

First, they are timesinks, meaning they consume a LOT of your time to be fun and to unlock the full potential of the game.  Second, they support addictive properties that can pull in just about anyone, and get you to play hours every day; while you neglect your family, friends, and other responsibilities.

Third, since most never have any completion, they have to attract you with what is called “Carrot on a Stick” tactics; this means they tease you with the next best thing (weapon, armor, mount, dungeon), only to get to the next best thing after that.  Basically, chase the carrot on a stick, once you finally reach it, here is another.  Don’t get me wrong, fun is fun, and some of them are fun, but in the end, they all go to this tactic.

Fourth…ehh, I could keep going, but I bet I am starting to bore you.

Another reason I am leaving PC gaming is due to most PC games being mostly online, you have no pause functionality.  Pause is important in so many ways, but instead of putting them all here, take the time to think about how a pause button could be useful to you in any situation.

So many people argue that PC gaming and console gaming end up costing the same amount in the end, and I have ready multiple articles backing it.  However, in my own research, and in my own situation, this is not true by any means.

In order to keep my computer up to date and playing the current games, I need to spend $200-400 a year on new hardware.  And you still have the buy the games to play on it.  In the last 3 years I have spent roughly $1200 upgrading a computer I spent $1500 four years ago.  So in four years that is $2700, not counting games.

And we are not done!  In order to play multiplayer games, everyone I want to play with must have the game as well.  2 of the main people I play with are my wife, and my brother, and my brother doesn’t have a job, so I must purchase his games for him.  This means if we all want to play a new PC game, that is $180 for me.  Most Xbox 360 games have up to 4 player split-screen multiplayer.  That means buying one game, and being in the same room with the other players.  Double win in my opinion.

Plus, I am also maintaining both of their computers, but figuring that in would just make the PC gaming cost crazy.

Being a better person?

I don’t know about you, but when I get off a PC game, I don’t just get right off the computer and spend time with my family; more likely I check forums, facebook, and do other web activities.  Before I know it, a 2-3 hour gaming session just turned into 4 due to forums and facebook.  When I play my Xbox 360, most of the time after a maybe 1 hour gaming session, I instantly go to my family or to something I need to get done.  This greatly improves your chances of getting the house clean 😀

I have noticed time spent with my family, and getting other things done greatly increased since lowering my PC gaming time.  Not only that, but it is easy to get your family involved with the Xbox 360 than it is with a PC game.

Being a better person…in Christ! ^_^

Don’t get me wrong, Christians gaming is not wrong.  Nor is Christians playing games for countless hours of the night.  When it is wrong, is when it interferes with your family, your friends, and your walk with God.  I openly encourage gaming, now and probably always will.  As a matter of fact I am a member of a very large Christian gaming clan called Tribe of Judah ( http://toj.cc ).

Gaming is not only a good form of entertainment, but it also provides a wonderful way to have fun with friends and family.  (In my opinion, it is one-hundred times better than spending time watching TV.)

Stepping away from PC gaming will give me a lot more time for God, and Bible study.  I will be able to focus more on who I should be in Christ, and have more time to help others.

I am leaving PC gaming because (for me) it is unhealthy, time consuming, inconvenient and expensive.  And my friends and family will benefit from more time with me. 🙂

5 thoughts on “Why I am leaving PC gaming…”