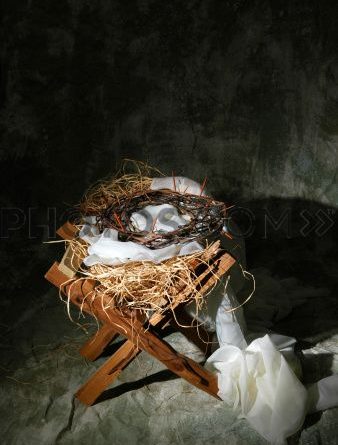 The Incarnation: The Best Present Ever

The greatest gift ever given came as a baby, and we would do well to reflect and remember who He is and why coming as a baby was necessary.

“For unto you is born this day in the city of David a Savior, who is Christ the Lord. And this will be a sign for you: you will find a baby wrapped in swaddling cloths and lying in a manger.”

This week, the Carolers at my local grocer filled the air with holiday cheer by singing “Away in a Manger.” We sing songs about him, but who is the baby with ‘no crib for a bed?’ They don’t include scenes of Jesus crying or pooing in the church plays, but we have manger scenes, not ‘inn scenes.’ Jesus situation was very human, gritty and Real.

Most Christians will say Jesus is God (note the activetense of the verb) while most non-Christians say Jesus was just a man. In my experience, we in the church have responded to the doubt around us by stressing the divinity of Christ to the exclusion of his humanity. While we should stress the divinity of Christ, we must not ‘throw the baby out with the bath water’ as it were and conceptually sacrifice His humanity to protect His divinity.

When we sing about Jesus’ birth, it’s very easy to think of Jesus as either a man or as God only. But Scripture holds these two ideas in tension without apology so we must as well.

Simply put, the Incarnation is a key tenet of Christianity. If you don’t believe it, you give up the entire enchilada of the faith. Why? First, without the Incarnation you do not get the Jesus of the Bible. Secondly, you lose the Savior of infinite worth but human identity.

Without being God, Jesus’ death would be of limited value, but being God, his death is of infinite value, so there’s no internal limit to its saving power (he can cover our bill). But, without being human, Jesus’ life could not fulfill the Law Adam broke for us nor could his death on a cross take our place. Only a human could be a propitiation or substitute for us. So it is precisely the Incarnation that empowers Jesus’ victory over sin and death in the cross and resurrection. For as Hebrews says he took on flesh and blood like us so he could intercede on our behalf as our propitiation (Hebrews 2:9, 17).

Who does scripture say Baby Jesus is?

He is Immanuel, God with us. He is the Eternal Logos and maker of all things, yet he is also a man who grew in wisdom and stature before both men and God, who got tired, was tempted, suffered true anguish in Gethsemane, and was crucified and died.

Only by permanently shouldering true humanity could God the Son stand in our place as the Second Adam. (That’s right, the Incarnation is permanent.)

What is the Incarnation?

The Eternal Word (Logos), i.e. the 2nd Person of the Trinity, took on flesh (permanently became human) and is forever now the God-Man, fully God and fully Man, joined together in a union comprised of two distinct natures (human and divine) neither of which being confused or blended, but distinct and yet somehow together in a way we can better describe than understand.

The boys back in the day called this the “hypostatic union.” It is a mystery, kinda like gravity. We can describe gravity, and tell you about its results, but truly master it? Nope. But what would you expect from the Trinity?

So, as you prepare to celebrate Christmas, mull over how the greatest gift given came without a gift receipt: the giving of the Son by the Father in the Incarnation.

If you really want to get into the Spirit of the Season, find the nearest baby and cuddle it. Be gentle, they’re fragile, but hold that baby close and contemplate how Jesus was like that: small, weak, frail, in a real sense dependent. He ate, slept and pooped just like you and I did when we first showed up. Yet, in the mystery that is the Incarnation, he was at the same time still fully God, somehow through his divine nature, still upholding the universe (Heb 1:2-3 and Col 1:16-17). Wild—Strange—Real.

This should humble and encourage us: God the Father, gave us his Son who willfully became human forever altering himself to honor the Father’s will, so as to make all things New. We can move through our day with a kind of courage that comes from knowing God the Son loved us so much he was willing to endure what we do and more, just to rescue us while we were still his enemies.

That kind of love does not abandon or quit on a person, it can and should propel us as we go through whatever providence brings our way, because if He would do that for us, we can trust Him in it with assurance and hopefulness no matter what comes. That doesn’t mean we like it or even enjoy all that life brings for life brings thorns and thistles. Still, we can deal with such knowing knowing we are not being abandoned to be cut by them. God the Father took the Evil of His Son’s crucifixion and used it to redeem the world and the resurrection is our proof.

Merry Christmas. This week I invite you to the following passages about Baby Jesus, why he came and how his unique status as the God-man made possible what he accomplished in his life, death and resurrection.

Purpose and Result of His Coming: