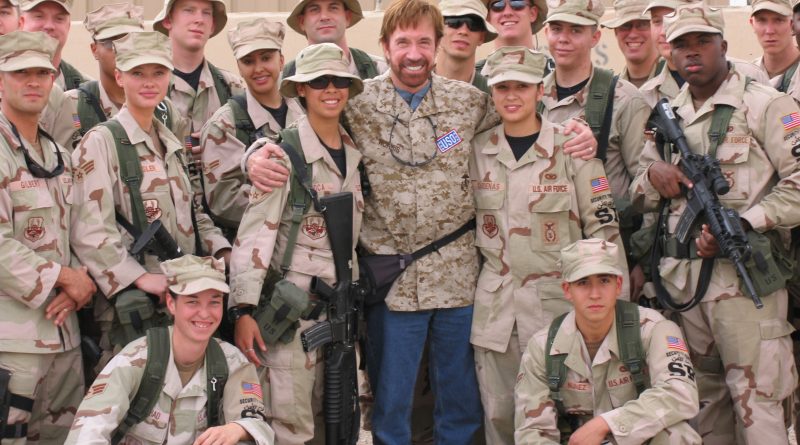 Last night at church we had a Mixed Martial Arts (MMA) demonstration followed by some teaching.  It was a great time.  I got some great notes from the speakers.  The first speaker was Carlos Machado who is friends with Chuck Norris, the demi-god that is said to start fire by rubbing ice cubes together, can count to infinity, and has a living grizzly bear as a rug in his room; too afraid to move.  He also did some work on the show Walker, Texas Ranger.

The second was from Victor Marx (http://www.victormarx.com/) who tells the story of his tragic life growing up, and how he fully embraces Romans 8:28 when it says “all things work together for good to those who love God, to those who are the called according to His purpose.”  You should really check out his story and documentary.

I will be talking more about these guys and some of the stuff they taught me soon, but for now I want to talk about something that comes from just the foundation of martial arts.

When you hear of martial arts, what do you think of? Fighting? Mr. Miyagi?  Martial arts is not just about getting strong and fighting to beat people up.  It is a discipline; it teaches discipline.

The word discipline is a heavy word.  If you want to be really good at something it takes a lot of personal discipline to get good at it.  This goes with anything. Martial arts, musical instruments, carpentry, or programming.

To be good, to be effective, you must discipline yourself. You must work hard, and not just from time to time, but all the time.  These guys that are good at martial arts are good because they do it, every day.  Hours a day of training and dedication to get good.

I can speak from experience with this point, but from the other side.  I have tried to play multiple instruments in my life, and tried various disciplines of martial arts, but for one reason or another (or for one knee giving out or another), I had to give it up.  Sure, I had a couple months of training, but it never became a part of my life.  Nothing that I ever became dedicated about long enough to get good.

I do remember a few things though.  Like how to break some simple wrist holds (if you hold my wrist in just the right way) and I can, with a lot of effort, play part of Fur Elise on a keyboard still, but I’m not good at it.  I did not, or was not able to, stick with it enough to let it become a discipline in my life.

Ever wonder why the followers of Jesus called themselves disciples?

This thought crossed my mind last night while thinking on these things.  Is it a coincidence that these words sound like they have the same root word?

Is it possible to be a disciple of Jesus Christ without having the same kind of discipline towards Him that martial artists have in training?

If you have followed this website for any amount of time it is no surprise to you that I am a fan of Leonard Ravenhill.  Leonard Ravenhill was a preacher with a great ministry. He was able to reach people for Christ and encouraged a lot of people to be bold preachers, to be prayer warriors, and to long for personal revival in ones life.

But the ministry he had did not come to him easily, it was not something that he just participated in occasionally and one day something just clicked and he was deeply spiritual.  On the contrary, every part of his life and ministry had the impact it had on others’ lives only because he was disciplined.  It was only because he treated prayer like a discipline that he was effective at all.  His son, David, said this about him.

My father was a powerfully anointed preacher who could bring down the convicting presence of God in a way that very few can. People would begin making their way to the altar even before any type of invitation was given, their hearts pierced by the Word of God. His preaching was superceded only by his passion for prayer. Like the apostle Paul, he carried “the daily pressure of concern for the church.” Prayer was his life. Prior to his death in 1994 he told me he had received a number of requests from seminary students who wanted to come and see him for the sole purpose of having him lay his hands upon them in order to receive his “mantle.” With his typical dry British humor, but at the same time deadly serious, he said, “Everyone wants to have my mantle but nobody wants my sackcloth and ashes.”

1 Corinthians 9:24-25 tells us that we are to train in the same way, with the same intensity that an athlete trains.  Not training to run, but to win.

Do you not know that in a race all the runners run, but only one receives the prize? So run that you may obtain it. Every athlete exercises self-control in all things. They do it to receive a perishable wreath, but we an imperishable.

I remember being amazed during the Olympics that just ended at the athletic ability of each of these athletes.  It never came easy to them, well, maybe for Phelps (just kidding).  They gave their life to their sport, to not just doing a good job at it, but at being the best.  None of them trained for last placed, or trained for the bronze; they trained to win the gold.

The self-discipline required to do that was amazing.  Hours a day at the gym and training for years on end, giving up many of the pleasures of life we enjoy like deserts or watching tv and playing games.  Why did they do it? For a medal and for fame.

How much more, my brothers and sisters, how much more should we be training spiritually to take the gold.  Not for fame and fortune, but to know God, to draw closer to God.  To have more faith.

For by grace you have been saved through faith. And this is not your own doing; it is the gift of God, – Ephesians 2:8

And through reading scripture

So faith comes from hearing, and hearing through the word of Christ. – Romans 10:17

It makes us strive to live Holy before God, while Jesus works on completing our faith

Therefore we also, since we are surrounded by so great a cloud of witnesses, let us lay aside every weight, and the sin which so easily ensnares us, and let us run with endurance the race that is set before us, looking unto Jesus, the author and finisher of our faith, who for the joy that was set before Him endured the cross, despising the shame, and has sat down at the right hand of the throne of God. – Hebrews 12:1-2

Being a Christian is not a weekend adventure, or morals we consult occasionally, it is a lifestyle of following Christ, a discipline of putting Him first in our life.  In every part of our life.

After all, this IS the call that Jesus gave to those who want to be His disciples.

Then Jesus said to His disciples, “If anyone desires to come after Me, let him deny himself, and take up his cross, and follow Me. – Matthew 16:24

Oh father, please forgive me for the lukewarm attitude I have had towards you.  Help me to have the discipline to put you as a priority in my life every day, and to stop living a life that ignores you.  Father, give me a renewed vision of the goal, and give me an increase in faith.  Only you are worthy of the pursuit of my life.

5 thoughts on “The Discipline of Discipleship”