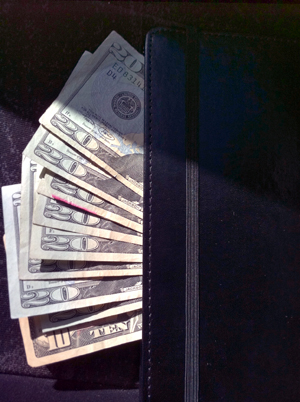 We have mentioned in many posts recently what God says about the rich. Mainly that it is impossible for the rich to get into heaven, and yet every one of us in the United States and the western world in general are rich. Considering the fact that most of the world lives on less than $2 a day we can get a sense of just how rich we truly are.

I know that many of those articles can be very convicting and give the impression that we are need to give all possessions away and live like the poorest so we can give away everything. I know the thoughts that can go through your mind when reading these articles because this is a struggle I have had for the past several months. I don’t write these articles with an attitude of “I got it all together, now do what I do!” On the contrary, I write these articles because it is what God puts on my heart, and He puts them on my heart ninety-nine percent of the time because it is the lesson I need to be taught.

The past several months I have been in conviction over my money, am I making too much, am I using it wisely, do I give it all away, what about retirement? I have had nights where I get home from work in the morning and weep and seek God in prayer because I am just so lost on what to do. I don’t want God to say it is impossible for me to get into heaven because I am obsessed with riches, or because I saved one million in the bank instead of giving it away. (ha, like that would ever happen :P)

So after months of seeking God in this, I finally have a hint of where to go. I wish I had the full answer, but until God reveals it to me you will be in the dark with me. 🙂

Is it wrong to make money?

Being wealthy is not a sin. Many heroes of the Bible were wealthy, Abraham for one, and even Zaccheius was wealthy and likely some of the disciples had at least a decent amount of money such as Mark (tax collectors generally did well then) and Luke, a physician had the ear of the “most excellent Theophilus” (Luke 1:3) which meant he probably had a position of power, which means wealth.

The difference, between any follower of God in the Bible and the rich man Jesus rejects in Luke 18, is that a follower of Jesus doesn’t care about the wealth. If you are following Jesus, your goal should never be about money, making more or saving more or even giving more, focus on Jesus. When He is your focus you realize that your wealth is really nothing more than a resource God has given to you to manage properly and serve Him.

Is it wrong to save money?

Saving money is not a sin as long as you are following God with your money. Zacchaeus (Luke 19) gave away 50% of everything he owned, because he wanted to use his resources to serve God, not to just save for himself. But why not give away 100%? He gave away what he was convicted to give away, following God’s prompt on his conscience. It no longer was about saving or having money to him, just about following God, even if it meant giving away his wealth. He didn’t care because he was following God, that is what matters. He is just one of many examples of how when we focus on Jesus, we care less about ourselves and our achievements and start to adopt the heart of God for the lost.

Here is another thing to look at. There is a joke of a guy who was trapped in a house during a flood. A guy on a canoe came by, asking if he needed help while the guy tried to climb to the highest point on the roof. The guy responded “No thank you, I have faith God will save me”. Then as the water continued to rise a helicopter came by to save the guy, who just replied “I have faith God will save me.”

Well, the guy ends up drowning. He gets to heaven and asks God, “why didn’t you save me?” To which God replies “I gave you warning a flood was coming and even after you ignored it I sent a canoe and a helicopter, what else could you need?”

Bad joke, I know, but it shows a lesson which is true. We can’t throw away God’s blessings and then expect him to miraculously save you last minute. He might, because He is sovereign and loves us despite us being bad stewards of His money. God has given us in America the money to get out of most situations. We just choose to blow it on ourselves and buy things we can’t afford and then cry out to God when we are out of money. Yes God provides for us, but does that really sound right to waste his provision and then blame him for “not providing” when times are tough?

Is that how we are supposed to manage God’s resources?

The Bible does give some allowance for debt, but I do not recall ever seeing the Bible promote or say it is a good thing. I personally think debt is a sin, for two reasons.

First, debt is almost always caused by our wanting what we cannot afford. You want that new car? Save up for it! Or find a cheaper alternative.

God has given us tremendous resources, there should be no reason we can’t save up for something whille still having money to give to those in need and supporting our family. It may take sacrifice, but at least you will be buying what you afford and not borrowing.

The second reason I see debt as sin, is something God has recently shown me. I am absolutely tired of not being able to help people like I once was able to, why? Because of my debt. My debt is draining so much of my money that I live paycheck to paycheck and have a really hard time paying for food, let alone helping others.

If I did not have my debt it would free up my resources to be able to help others. Lost your job? Sure, here is $350 to help you get back on your feet, oh wait, that money has to go to my car payment, sorry. There is so much more we could do without debt.

In my next article I will discuss about worrying over money and what God has told me about each of these areas in my own personal finances.

What do you think? Is it a sin to make money or save money? How do you ensure that you are using God’s money wisely and not just blowing it on yourself? Let me know in the comments below.

6 thoughts on “Living Rich, is it a sin to have money?”