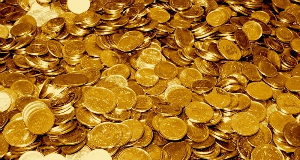 Zaccheus stopped and said to the Lord, “Behold, Lord, half of my possessions I will give to the poor, and if I have defrauded anyone of anything, I will give back four times as much.”

And Jesus said to him, “Today salvation has come to this house, because he, too, is a son of Abraham.

Both this passage and Luke 18:18-27 mention a link between wealth, what you do with that wealth, and your salvation. What is this link, and what does it tell us about our salvation?

This idea also looks to be backed up by the passage in Luke 18 where a rich man asks Jesus how he can have salvation and Jesus replies saying to give away all of his wealth. The rich man then walks away sad and Jesus says to his disciples that it is impossible for the rich to get into heaven.

There is something you have to remember about reading the Bible though. You cannot take certain passages in the Bible and base doctrines on those passages, you have to take the Bible as a whole. A lot of times concepts are explained and then later on they are refined or more detail is given.

So then how do we reconcile this with verses such as Ephesians 2:8-9?

For by grace you have been saved through faith, and that not of yourselves; it is the gift of God, not of works, lest anyone should boast. – Ephesians 2:8-9

The passage in James 2 ties these two concepts together perfectly and clears any cloud of confusion that some may have. James says “What does it profit, my brethren, if someone says he has faith but does not have works? Can faith save him? … Thus also faith by itself, if it does not have works, is dead.” (James 2:14,17)

A person is not saved by any work they do, no matter what it is, because our sin is so great to God that no amount of our “good works” could make up for it. It is only through our faith in Jesus Christ that we can have salvation, and by nothing else. But when you have faith, you will have good works as a response to your faith. It is not something you have to make yourself do, it is out of an act of love.

I love my wife, and because I love her I do things for her, help her out around the house when she isn’t feeling well, or buy her her favorite chocolate as a surprise when I am at the store.  These acts do not make her love, the acts do not make her my wife, they are just acts of kindness that I do in response to my love for her.  Faith in Christ works the same way.

Was not Abraham our father justified by works when he offered Isaac his son on the altar? Do you see that faith was working together with his works, and by works faith was made perfect? And the Scripture was fulfilled which says, “Abraham believed God, and it was accounted to him for righteousness.” And he was called the friend of God.You see then that a man is justified by works, and not by faith only.

Likewise, was not Rahab the harlot also justified by works when she received the messengers and sent them out another way?

For as the body without the spirit is dead, so faith without works is dead also. – James 2:21-26

The rich ruler in Luke 18 wanted Jesus, but he wanted his riches more. He did not have faith or he would not have cared about his riches.

Again, the kingdom of heaven is like treasure hidden in a field, which a man found and hid; and for joy over it he goes and sells all that he has and buys that field. – Matthew 13:44

When you are saved through your faith in Christ you have a heart for God, and a heart for others. At that point the things of this world should seem meaningless as you pursue Christ and the kingdom.

Pure and undefiled religion before God and the Father is this: to visit orphans and widows in their trouble, and to keep oneself unspotted from the world. – James 1:27

If you have wealth, how are you using that for the kingdom of God? Are you just spoiling yourself? Are you staying “unspotted from the world”? As a professing follower of Christ you should be pursuing the things God wants you to pursue, and if you are not then why not? Do you put Christ before your family even? (Luke 14:26)

Are you really putting Christ first in your life?

If Jesus confronted you today, would he say “today salvation has come to this house” or would he say “how hard it is for those who have riches to enter the kingdom of God”?

The choice is yours.

One thought on “The link between wealth and salvation”